I was most intrigued when I learnt Tushar Sethi was curating the art being housed at India’s first St. Regis Hotel; which unveiled itself amidst fireworks, champagne and an enviable but important art collection.

Here are a few of my favourite pieces of art (which are on public display), as I was indulged in a private art tour, soon after the opening.

What I appreciated was Sethi’s discerning passion for Indian art, which had him curate almost 150 pieces for the hotel. Along with artworks from his and Gayatri Ruia’s impressive personal collections, guests of the hotel are certainly bound to have memorable moments, looking at a treasure trove of not only masters like Hussain, Souza, Raza and Maity but modern and contemporary artists as well.

My favorite was a painting from Jagdish Swaminathan’s Bird, Tree and Mountain series. This piece is from Gayatri Ruia’s private collection. Christies valued an untitled artwork from this series at $182,500 at a recent auction. When I stood in front of it, it reminded me of Paul Klee’s work, it reminded me of surrealistic traditions, but most importantly, it reminded me of courage. Sometime in the 1960s, Swaminathan made a career change, from being a journalist to being a full-time artist. Little did he know that his art would find itself in homes, museums and luxury hotels around the world. Courage always pays its dividends, only, sometimes, you might not be alive to reap them.

Arunkumar H.G.’s neo-pop oeuvre was vibrantly on display, as I stepped out into the ninth floor lobby. A bull, a neon orange bull in fibreglass sits comfortably beside some indoor plantation. If you head over to Saffron Art, you will see what I mean. He has created several Nandis in several colors, using fiberglass. The artist’s love for toy making is what made me fall in love with this bull, not the didactic and moralist undertones of this intricate sculptural work.

PS: for those of you who know me, would know, that I’m fascinated by all things bovine, cows in art form is what I love collecting. Here is the one Jayesh Sachdev painted for me in 2013. The Bengali, monochrome avoider, mythical creature lover in me did cartwheels when I saw the stunning Paresh Maity sculptor Equus Quatro on display. The oil painted fiberglass toy-like sculptor is of a four-headed horse like human, it has cathartically painted eyes, which watch all four directions. Romanticizing rural Bengal in an ornate luxury hotel, I would not have it any other way. The hotel also houses a rather large watercolor by the artist. Maity has achieved proficiency over the medium, which not many have. The expansive four-by-eight feet long painting of a Shillong sunset had me standing still for several minutes, trying to appreciate the magical glow it emanated.

The hotel commissioned G.R. Iranna to create a mural for them. Iranna interpreted it in a three-piece canvas chronicling Bombay, as we know it. I could not decipher any postmodern logic but was taken aback by the twin themes of diversity and continuity. It made me frown, smile and peer. It also reminded me of my love for Bombay; because along with the paradoxes, the ironies, it also represents everlasting hope. Iranna’s artwork lives up to contemporary expectations and fits comfortably into the St. Regis hotel.

Outside the Library which is also their business centre hangs a chaotic canvas depicting a very chaotic city. Benaras. Manu Parekh is a modernist to reckon with. He walks around Benaras, soaks in the chaos, the rituals, the depravity and the colours and then expresses his interpretation of fear and faith on canvas. This theatrical canvas made me linger and come back to it a second time; this time, to see and not merely look.

Jogen Chowdhury’s five faces depicting human emotions found a wall at the St. Regis too. I would have been alarmed if he was not represented. These hand drawn, distorted, almost flaccid but very lucid portraits are dark. I am amazed when artists with very few strokes, conjure up memorable personalities. These five faces certainly need more light in the inner walls of the atrium where they are hung. These monochromatic works cast an eerie sense of curiosity in me. And my love for Chowdhury’s inky, freestyle, obese lines lived on. 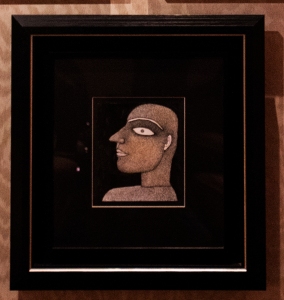 And finally, when I was satiated with all the art that I had witnesses and after all the memories of growing up in a family of artists and art lovers had been invoked, and after I’d participated in the iconic Champagne Sabering ritual, where the head butler uses a very sharp saber to hack of a bottle of champagne, I was ready to go home. But not before I saw the most beautiful installation art, in the transit lobby.

Dhananjay Singh craftsmen, an artist, a sculptor and frankly a genius has welded a tree out of metal. His effortless navigation of metals makes his work breathtaking in detail and form. The most striking aspect of the figuration of this three-dimensional tree is the harmony of material and technique. The entire tree (the trunk, the branches) is created as a unit like cell. The marks of welding and yellow-colored brass markings only further the organic-growth narrative this installation sought to invoke. Its weight and magnitude made this magnum opus piece impossible to cart up to the ninth floor, so it lives, in silent splendour in the transit lobby. Next time you are at the St. Regis, make sure you don’t rush through the hotel, but that you take the time to stop and appreciate Sethi’s discerning eye and excellent curation. He knew which ones to keep.

Thank you St. Regis for inviting me. Thank you, Deepak and Tamara for the photographs.

© [Abhik Bhattacherji] and [Seventh Breakfast], [2019]. Unauthorized use and/or duplication of this material without express and written permission from this site’s author and/or owner is strictly prohibited. Excerpts and links may be used, provided that full and clear credit is given to [Abhik Bhattacherji] and [Seventh Breakfast] with appropriate and specific direction to the original content.
19.068198 72.830573
Bandra West, Mumbai, Maharashtra, India

One thought on “Knowing Which Ones To Keep”