This article first appeared on Discern Living where I am the Editor-in-chief. Discern Living, is a discovery portal that simplifies the shopping experience for home and décor,  and will launch via an app in spring 2016.

Founded in 2008, the India Art Fair is one of South Asia’s most prominent platforms for modern and contemporary art. It serves as a decisive portal into the region’s (Nepal, Pakistan, Sri Lanka and India) cultural landscape. It is the one time of the year that every member of the art community convenes, participates, and benefits from coming together. This year, Neha Kirpal the Founder and Director of the India Art Fair claims, is the most rigorous edition which reflects the diversity of the arts in India and the region. With BMW and JSW as key patrons and partners, the India Art Fair 2016 was an effective window through which one gained insight into the core of artistic endeavours in India, the subcontinent and the world.

From left to right – Gopikrishna and Santana Gohain

When the India Art Fair opened its doors in 2008 (then known as the India Art Summit), it saw a stupendous inflow of visitors, investors, critics, artists and galleries. They came to appreciate and criticise and also, quite frankly, to understand what the fuss was all about. In 2008, the Indian public had nowhere to go if they wanted to interact with art. The state of many of our museums was (and continue to be) abysmal and most artworks were tucked away in air-conditioned foyers of multi-starred hotels and hung in the living rooms and board rooms of corporate India. In the past five years, biennials, city-specific art festivals and public art installations have offered the public a glimpse into the burgeoning art market. Five years ago, the Art Fair sold works created by the likes of Husain, Dali, Hirst, and Souza. Today, it still does but has also added a decisive roster of young artists selling affordable art. Mixed media has also seen a rise in popularity, as younger buyers are not afraid to bring home more than just oils on canvas.

January 28-31 saw New Delhi play host to the India Art Fair, which has been at the NSIC grounds in Okhla since 2012. With a simple yet effective hashtag (#IndiaArtFair2016) to capture the four-day visual carnival, the event this year seemed to declare that it had arrived as a prominent and decisive event in the cultural landscape of India. This year, a selective mix of international and local galleries from Delhi, New York, Jaipur, Dhaka, Barcelona, Mumbai, Dubai, Singapore and Jeddah participated. Its eighth edition was richly varied both in thought and scale. It became more than just a visual arts event – hosting speakers’ forums, film programs, art projects, curated walks, performances and some incredible after-hours gatherings.

Jacob’s Creek in hand, eye glasses balanced demurely, I walked through the well-planned labyrinth at the NSIC exhibition grounds and admired the breadth and scale of the South Asian art on display. Art has always been a conduit for conversation and I respected the discerning curation with which this edition was exhibited. The first set of artworks that I fell in love with highlights several contemporary issues. Just like art should. Culture must be a catalyst for resolution of conflicts, dialogue and reflection. In no particular order, here are some of my favourite picks from the works on display. The list is varied, often comic in spirit even while depicting terrible hardships, while others are amusing representations of imagination.

Taseer Art Gallery from Lahore displayed the socio-culturally important work of Farida Batool. Titled ‘A City That Is Mourning,’ her work paid tribute to Lahore through lenticular images. This artwork allowed viewers to reckon with the complexity hidden behind the city’s characteristic red brick walls. Batool’s work grapples with globalisation and inequity as she explores everyday tumult and the extant violence in Pakistan. Sanam Taseer, the gallery’s director, must be congratulated on bringing these important pieces of art as a peace offering to New Delhi.

The eye has been an artistic trope used by several artists. Van Gogh, Picasso, Rembrandt and Escher have successfully created powerful human faces where the eye has influenced our interpretation of the artwork. Anita Dube uses enamelled eyes in her installation art pieces simply titled ‘Beef’ and ‘Mutton,’ which serve as a frightening reminder of the Dadri lynching. The brutality of the government was made stark by the enamelled eyes that stare back at you. It was an unambiguous commentary on the collapse of choice in urban India.

“Artists are free to make art for art’s sake, and I respect that. I do not criticise them. I’m not born an artist. I’m born a human. I care about human conditions rather than their opinions. I have no choice.”  – Ai Wei Wei, a Chinese contemporary artist, free speech advocate and activist. His controversial photograph, where he posed as a drowned Syrian refugee boy, was on display at the India Today booth. Shot by Rohit Chawla for the magazine, this print was shocking both in its origin and its message. #AiWeiWei says it like no one else does. Does he cross the boundaries as he emulates this tragedy? Only you can decide. He is an artist who continues to inspire me through his art that speaks out against China’s attack on free speech, and his crusade in favour of freedom and liberation.

The Nepal Art Council from Kathmandu presented the works of seven artists—Hitman Gurung’s representation of his perspective of Nepal was brutally striking. ‘This is My Home, My Land and My Country I,’ (2015), a digital pigment print and drawing by the Nepalese artist, showed photographs of faceless human beings holding up citizenship cards. It was a cruel demonstration of issues ranging from identity and rights to citizenship and inequity. Dina Bangdel, curator of the Nepal Art Council booth, did an impressive job of powerfully bringing to light Nepal’s cultural narrative at a time when the kingdom is drowning in the fuel crisis, post the apocalyptic 2015 earthquake. 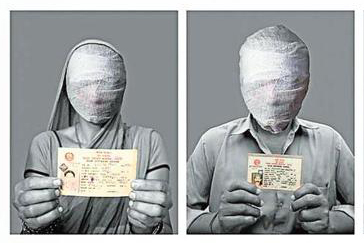 Art is also playful and flamboyant. It exists to make us laugh as much as it drives us to ponder. Here are a few of those that left a lingering sense of joy.

Crayon Art Gallery from New Delhi had ArunKumar HG’s giant ‘Nandi’ in fiberglass and Ravinder Reddy’s ‘Head of a Woman’ on display. Didactic and cultural undertones aside, I loved how both artists have used a variety of materials to create stunning sculptural art. They are fun, playful and enormous. 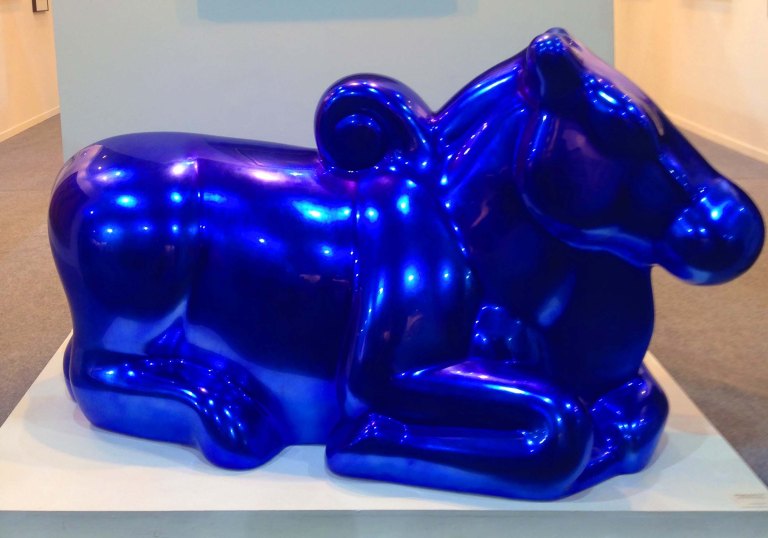 Tasveer Art Gallery from Bangalore displayed various artists at their dimly-lit booth where the shadow and light effect was quite theatric. On display was the ‘Maharanis – Women Of Royal India’ collection. It is a special collectors’ portfolio of twenty modern archival prints which contains regal portraits from the length and breadth of erstwhile princely India.

The booth also had a striking watercolour series by Gilles Bensimon. The effect of his abstract flower arrangements in water bodies was psychedelic and visually enchanting.  This magical, vivid series had an ethereal quality where the colours almost leapt out of the frames. “When I plunge them into the water, they are briefly reborn. It is as if I am bringing them back to life; the water helps me capture the essence of their living beauty one last time before they wilt and fade” – Gilles Bensimon 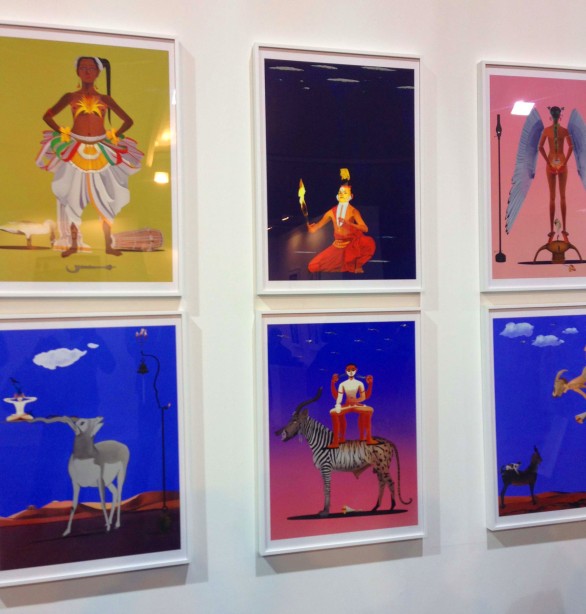 Apparao Galleries from Chennai and New Delhi introduced me to the mixed media art of N. Ramachandran. His cabinet of curious quirks brightened up a smoggy Delhi winter evening. It was wonderfully absurd to see how vibrant pop culture influences took on a new meaning when transferred into a curious little cabinet. Strings of pearls, cans of cola, nude pin-up girls, toads and toddlers all featured in this brightly lacquered piece of art.

#IndiaArtFair2016 was poetic and utopian, exquisite and irreverent all at once. In a country of over a billion people, it is critically important to make art as we understand it in an urban milieu more accessible. Endeavours such as the India Art Fair help in accomplishing this. Along with school children and art students, it was thrilling to see a younger India represented in full force, as viewers, critics, and potential collectors all came out to appreciate and be dazzled by the modern and contemporary art on display. It was also heartening to see serious Indian collectors showcasing their collections to a wider audience, both domestically and internationally. While the business of art changes with each passing year, there is a deeper commitment from the younger generations to collect – and therefore support – new artists who create stunning works.

The India Art Fair takes its social and cultural responsibility seriously and allows everyone who cares to come and stay a while. I hope in the years to come, art helps facilitate deeper dialogue with the subcontinent and the world at large.  I hope art continues to explore questions around politics, culture, and aesthetics. I hope art continues to bewilder and provoke.

Abhik Bhattacherji is the Editor-in-chief of Discern Living

© [Abhik Bhattacherji] and [Seventh Breakfast], [2019]. Unauthorized use and/or duplication of this material without express and written permission from this site’s author and/or owner is strictly prohibited. Excerpts and links may be used, provided that full and clear credit is given to [Abhik Bhattacherji] and [Seventh Breakfast] with appropriate and specific direction to the original content.