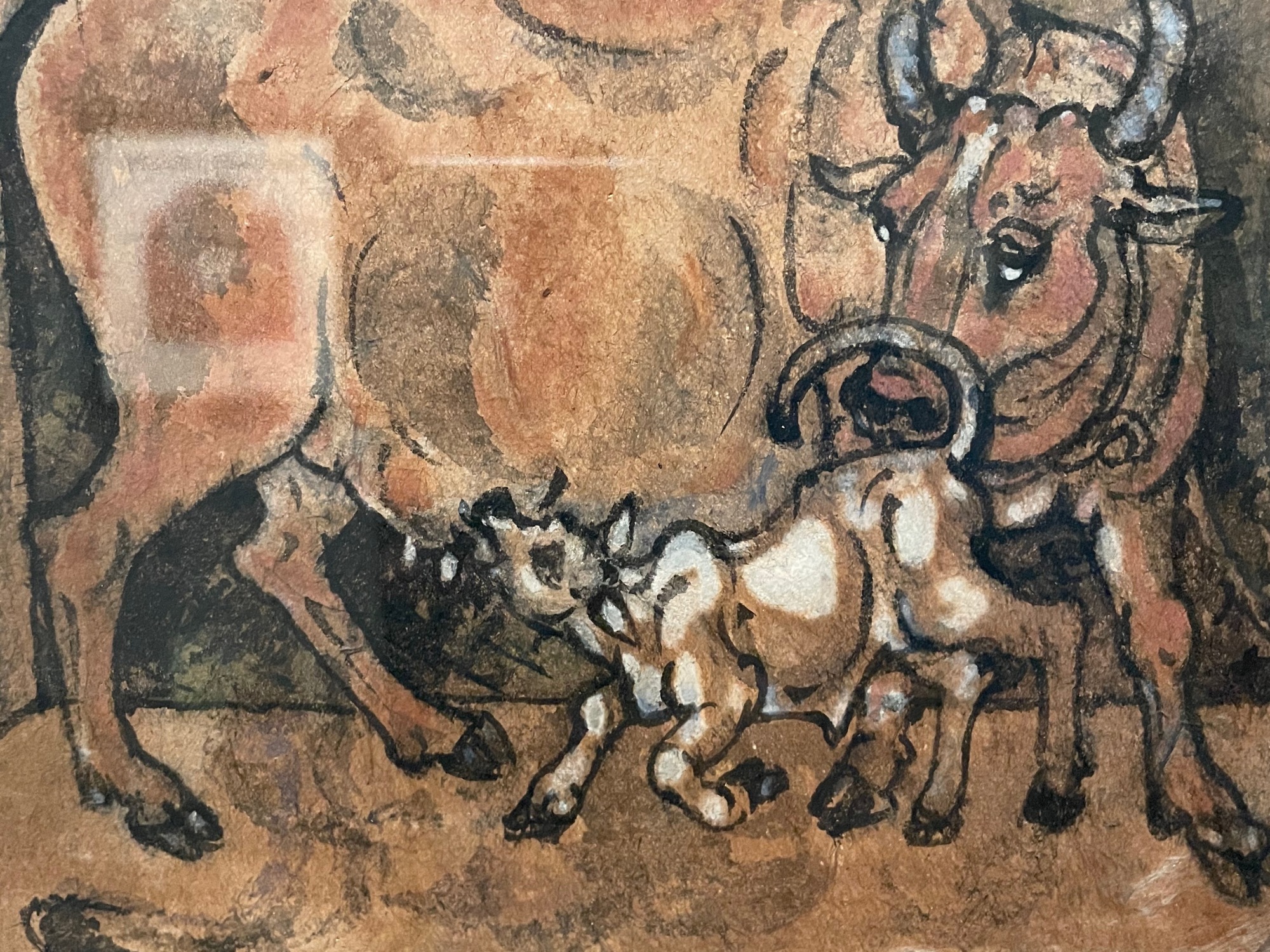 I have a feeling that artists from Bengal created India’s national vocabulary for art. Wait, not just for art, but also for Indian Nationalism. I am not in the least astonished to be reminded of the connections between the Bengal art movement and the Swadeshi movement. Oscar Wilde would be chuckling to see how artists were at the forefront of raising a paintbrush against our colonisers. Art does imitate life or wait, is it the other way around!

(We must talk about my turbulent feelings for the current war, protests against the regime and the opaque 1700s ‘Company Paintings’) but for now, back to my stunning art-history extravaganza!

The everlasting influences of our colonial past, which lead to the birth of Indian Modernism depicting styles from the past, Hindu imagery, rural life, in sombre temperas and indigenous materials, I was so happy to step through the giant wrought iron gates of the Old Currency Building in Calcutta into the origins of Indian Modernism.  2021 minus 1833 is 188 years- which is how old this stunning restoration in whitewash, marble and chunar sandstone is. On exhibit is two centuries worth of art, enough to make me gasp and shriek in joy! I spent a few hours ogling at the evocative powers of gestures, material and stories, and here are a few of my favourite things on display.

Would the real Maa Kali please stand up?

While the resident deity of the Kalighat temple seems to be the most misunderstood Hindu goddess, to me she’s the high priestess of duality, the queen of mysticism and the mascot for all things empowered. Seen above in Euclidean, Pat, Neo-Cubist and Abstract styles. My favourite is the first manifestation of Kali by Haren Das, a prolific printmaker, who lost his home when Bengal was partitioned. He was born one hundred years ago, and through his artistic wanderings poured his humble, pastoral life into his art.

Who doesn’t love a myth underlined with poetic meditations on inter-generational vengeance and revenge?

It was a scheming snake, I’m told,
with a grudge against my great-grandfather
that killed my father.

Janamejaya the king who lost his father to a snake bite proclaims to the gods that he’ll purge the world of all snakes. While the poets chronicled the snake genocide, the priests incanted chants that made snakes fly into a fiery inferno hotter than PornHub! Takshaka the chief of the serpents was yet to be purged, clever one was seeking asylum from Indra. But the high-class Brahmin priests chanted stronger prayers and had both of them hurtling towards the pyre until Astika a sage-child (his back story is fascinating) put a stop to this carnage. Centuries later an anonymous artist in Bengal decided to commit this ancient fable in oil on canvas, with Dutch-style mansion windows and the caste system on full display! Yet another century later, on a sunny morning, I was transfixed before this painting, remembering Dr Arjun Mahey who never showed up to our 3rd year English lectures at St. Stephen’s, but still taught me everything I know about the Mahabharata.

Just fun fun fun! Big bold lines, homemade dyes, reeking and shrieking with levity, social satire, laughter and oral histories. These simple, spontaneous and smooth paintings on scrolls, cloth and paper are some of my favourite souvenirs to gift after my holidays back to Calcutta! Who doesn’t love some riotous folk-art in their urban homes? Although thank goodness the religious imagery and elements have been balanced out by maach-stealing pussycats, sexy courtesans, devious babus and charlatan saddhus!

Shop for these at Baro Market

My favourite modernist from Bankura, the award-winning student of Abindranath Tagore, Jamini Roy and his lustrous, bold and expressive contours continues to captivate me. I must congratulate his parents who allowed and encouraged him to spend his childhood observing and documenting potters, peasants, dollmakers, weavers, carpenters in his rural Bengal home. Today his single-line women, with almond-shaped eyes and portraitures are a part of an oeuvre that inspires us to look deeper. Look deeper at his life, where he started his art exploration as an observant child, to learning with and from the European masters, returning to challenge Revivalist Indian art, transitioning into an indigenous form, one that reflected a Nationalist, leftwing Bengal. I hope more people have the pleasure of looking at his simple brushstroke masterpieces, made with pigments found in nature and continue loving them until the next world war destroys our planet.